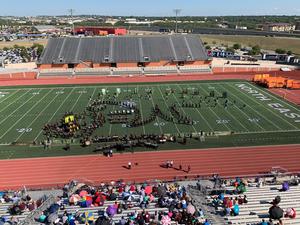 The Mighty Tiger Band had a busy and successful marching season with their 2019 show, "Something Wicked".
Their first competition was the East Central Hornet Invitational where they placed first overall and won outstanding color guard and percussion awards.
Then, they had a double-contest day competing in both the Rocket Review and the Roughrider Marching Contest. They placed second at Rocket Review, then brought home the top award at Roughrider, winning outstanding hornline, drumline and front ensemble.
On October 21st they competed at the UIL Region 12 Marching Contest where they earned Division One rating from each judge. They advanced to the Area D Marching Contest in Pflugerville where they finished in the top ten.
Congratulations to the Mighty Tiger Band!