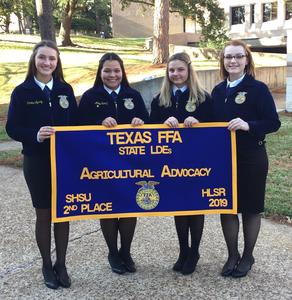 It wasn’t the first visit to the State contest for the members of the Advocacy team; they were the State Champions in Public Relations in 2018.

Karina Lyssy explained the difference between the two years, “This year we were much more confident during our presentations and learned many new skills.  The main difference between each team is how they work, although, with hours of practice and great coaches, our team was more than ready.”

Caly Rethaber added that with their experience and highly competitive coach, “we know what we should sound like, and we push each other to achieve that.”

Even though it was the team’s second trip to State, they didn’t take making the finals for granted.

“When they announced that we made finals, all the hard work that we had done to make it to that point paid off.  We knew we had one more performance to lay it all down.  Nothing will ever beat the feeling of competing in an event, and making it to the finals to compete for the final time,” said Abby Saenz, one of the three sophomores on the team.

For one of the team members, it was her last visit to the state contest.

“It was exciting and nerve-wracking at the same time.  This was my last chance to attend State before I graduate, and all I wanted was for my final year to go out with a bang.  I was in tears when they announced we made finals and cried even harder when we placed 2nd.  It’s all I could have ever hoped for,” shared Hailey Peterson, the only senior on the team.

Mark Jarzombek, FFA Teacher and team coach, doesn’t think this is the end of the leadership teams’ successes.

“The knowledge we gained this year, with very young teams, is tremendous.  Both teams are comprised predominately of underclassmen and the future looks bright for these young ladies.  I am excited about the future for our leadership teams,” he said.