February Students of the Month 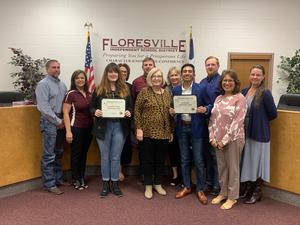 Savanna Vipond and Jai Ramesh are February Students of the Month. Read more about these outstanding seniors by clicking the headline.

February Female Student of the Month

Savanna Vipond is the 17-year-old daughter of Amanda and James Vipond.  She is in the top quarter of her senior class with an overall approximate GPA of 3.96.

Savanna is the highest-ranking cadet in the ROTC having been promoted at the end of the fall semester to Cadet Colonel.  Throughout her years with ROTC, she has served as the Financial Officer, Chief of Staff, Unarmed Regulation Committee, and Drill Team.  She is the Color Guard Captain for the Mighty Tiger Band and a leader with Link Crew.  Additionally, Savanna is a member of the CyberPatriots and Business Professionals of America.

Savanna is in all advanced classes including dual credit and Honors.  She plans to attend UTSA where she intends to major in Cyber-Security.  Her top strengths are Context, Restorative, Learner, Belief and Competition.

February Male Student of the Month

Jai Ramesh is the 17-year old son of Sejal and Niraj Patel. He is ranked 6th in his class with an overall 104.3 GPA.

Jai serves as the treasurer of the National Honor Society, Drum and Snare Captain of the Mighty Tiger Band drumline, and is a leader with Link Crew.  He plays Varsity Tennis and has participated in Leo’s Club.  Jai has received awards through tennis and his academics, including the All-A honor roll all four years of high school.  He received the Palo Alto Part-Time Honors Presidential award.

Jai is in all advanced classes including dual credit and Honors.  When not busy with school, he volunteers on Hope Committee projects and various projects for Student Council.  He also has a part-time job at Lew’s Patio and Grill.

Jai will be attending Baylor University where he will major in Bio-Chemistry with a Pre-Medical Sciences emphasis.  His top strengths are Deliberative, Competition, Restorative, Strategic and Individualization.